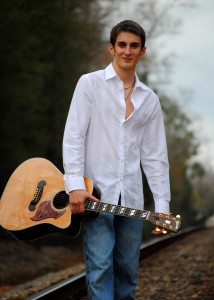 Lamon Records Nashville is proud to announce the signing of twenty year old country artist Dusty Sanderson to its label roster.  The young singer/songwriter was in Quad Studios in Nashville late last week recording original songs for his upcoming EP release, which should hit the street early in 2013.

The Pensacola Florida native has been playing guitar since he was 10 years old and singing since he turned 14.  “It all started around a bonfire on the river,” says Dusty, “with just me and my guitar, which eventually led to me getting my first real gig in my hometown at a little place called the Fugly Worm.”

Suddenly, the young aspiring artist was landing professionally paying gigs at all the bars and clubs in the area.  His deep baritone voice is reminiscent of great country singers like Vern Gosdin or Lefty Frizzell, yet he makes every song his own.

“Dusty has a very unique quality to his voice and a viable music style of what he’s writing,” says his producer Dave Moody, president of Lamon Records. “It’s very ‘now’ … a mixture of backwoods country and hard driving high energy rock.  I think he’s drawing from the best of today’s country artists, and classic outlaw artists too, like David Alan Coe, Waylon Jennings, and others.  Whatever he’s doing, it seems to be working.”

Asked about his songwriting, Dusty says, “I’ve been interested in writing songs all my life, but I didn’t get serious about it until I was 17. I had a girlfriend that I spent all day, every day with, so when she took a trip to LA for a week I had no clue what to do with my time, so I sat down in my room and started writing.”  And he’s not stopped since.

Stay tuned for more from this talented country newcomer.  For more information on Dusty Sanderson or Lamon Records Nashville, contact (615) 379-2121 for Donna Botts (ext 104) or Dave Moody (ext 101). Or visit the Booking Our Artists page online.