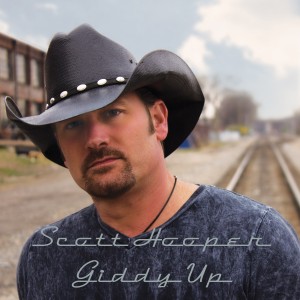 Scott Hooper has spent a lot of time on the road. He’s lived in the north and in the south. His cover band successfully toured the east, west, and everywhere in between. Scott knows the excitement of traveling and the pains of being away from the ones he loves. The singer/songwriter from Massachusetts has compiled a collection of songs from his experiences for his debut EP with Lamon Records.

The EP, “Giddy Up” is full of traveling songs with lyrics inspired by many aspects of life on the road. From meeting new people and stories of love, to the pain of missing home, and even a rollicking tribute to his car, Scott showcases his classic country voice and modern country songwriting.

The upbeat song “Judith Elaine,” based on a poem by a friend of Scott’s, inspires thoughts of dancehall romance, jukeboxes, and cowboy hats. “Giddy Up,” a song sure to have listeners rolling down windows and revving engines, earned its hook from a conversation overheard in a convenience store while on the road.

Life on the road has its hardships, and the cleverly crafted “Won’t Slow Down” shares the story of a truck driver from Alabama who can’t wait to get back. Scott relays the voice of experience and imagines that the driver turns the music up loud and sings every song on the radio to pass the hours.

Scott made a trip down to Nashville in March to shoot his first music video for the first single off the EP, “TV News.” Partnering with Elevating Entertainment, Scott and the team formulated a powerful storyline and concept visuals to bring this song to life. He video centers around a solider on his way home from service and the anticipation that builds between he and his wife in the moments before they reunite. Scott gets down to the real message behind the song:

“Not that news isn’t important, but it’s so easy to get caught up in the everyday negativity, violence, differences between people, difference between countries, and scams. Sometimes we need to be reminded that, once in a while, it’s good to separate yourself from all of that, shut it off, and take a good look at the important things around you. The life we live doesn’t have to be about violence, war, and scandals all of the time. Let it all go and let the headline story be about you and the ones you love.”

Producer and President of Lamon Records Dave Moody is excited to share this video, both for its progressive look and heartfelt message.  The entire project, Dave says, will resonate well with fans.

“Scott’s baritone voice is reminiscent of others you’ve heard, but he has a style that is truly his own.   His songwriting is catchy at times, heartfelt in moments, but always honest.”

The EP is a compilation of joys and heartaches from an artist always on the move. At the end of the day, Scott hopes the project is uplifting and positive.

Scott Hooper’s Lamon EP, “Giddy Up” is set to be released May 21st on iTunes and in the Lamon Records online store.  For more information on Scott and other Lamon Records artists, visit www.lamonrecords.com.