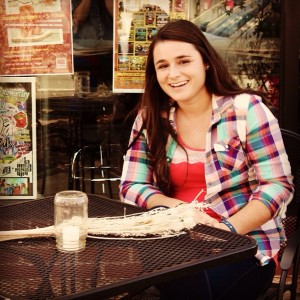 Hayley Whitley jumps at every opportunity she has to sing. She and her sister belt out classics by The Gold City Quartet and The Temptations in the car. She sang growing up in church, performed in school musicals, women’s ensembles, and in the Wingate University Choir. She’s a force to be reckoned with on the softball field, playing for Wingate as well as opening a few games with her version of the National Anthem.

This ambition led her from her home in Monroe, NC to the Blue Ridge Mountains for the Gideon Film Festival and the 2012 Music Artist Talent Search sponsored by Lamon Records Nashville.

Hayley sang with other talented artists before a panel of judges headed by Josh Moody, Creative Operations for Lamon Records. The winners were announced following a banquet two days later. Hayley recalls being so nervous she almost couldn’t eat.

“We enjoyed a beautiful and tasty meal, but my nerves were building. As the artist finalist were about to be announced, I heard Dave Moody call out names of other competitors that I thought would have won, I remember thinking there must be some mistake.”

Hayley’s standout performance garnered a first place title and a recording contract with Lamon Records. The next step was Nashville to record her EP at Kingswood Studios and Quad Studios. The album features her unique versions of modern country and Christian tracks, such as “American Honey” by Lady Antebellum and “This Little Light” by Addison Road.

“Hayley was one of the best singers I’d ever heard perform live when she won the Gideon Music Artist Talent Search,” says Dave Moody, producer and president of Lamon Records.  “I really like the depth and character of her voice.”

Hayley’s first EP, “My Heart,” is due to release February 26. For more information on Hayley and other Lamon Records artists, visit lamonrecords.com