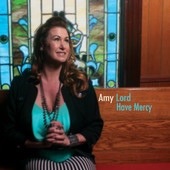 Amy Lord’s first single and video, “Have Mercy,” is now available on iTunes and can be heard on radio stations across the country. The single is one of many original tunes on her first album of the same name, which she is proud to present as tribute to her spiritual walk as a Christian.

“‘Have Mercy’ as an album in its entirety is about my musical journey,” reflects Amy. “From the tragedies that surrounded and inspired the title track ‘Have Mercy,’ to the waiting and timing involved in the pursuit of my dream in ‘God’s Time,’ each song has been an integral step in the process.”

“Have Mercy,” showcases her songwriting and passion for encouraging others through the Gospel. Standout tracks on the album include “God’s Time,” praising patience and hope, and the feel-good ballad “Good Day.” Amy also presents her own version of the Jars of Clay hit “Flood.” The song holds special meaning for her as it was one of the first songs she learned after giving her life to God.

“Amy’s songwriting and vocal performances draw the listener in to her musical landscape. Many of her lyrics come straight from her own life experiences and they connect with her audience,” says label President Dave Moody, Grammy nominated and Dove Award winning Artist/Producer.

Amy came to Nashville to film the video for “Have Mercy.” The video centers around a young girl whose crumbling life is overwhelming her. Amy experienced examples of this in her own life. Those events subsequently inspired a change in her faith life and her songwriting. The video ends with the young girl looking up towards heaven in a moment of hope – exactly what Amy ultimately wants the listener to take from her project.

“My hopes for the album are to reach as many people as possible with the message of hope and what proved to be true in my life: God fixes broken things.”

For more information on Amy and other Lamon Records artists, visit www.lamonrecords.com.