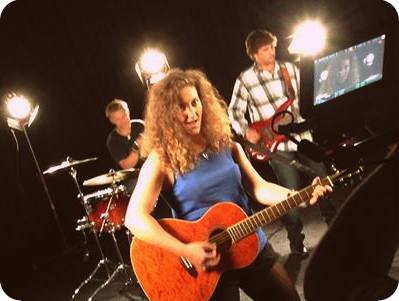 Lamon Records artist Sammy Hakim spent the first weekend in September filming her music video for “Get A Little Closer,” the lead single off her first EP with the label.

The concept for her video combines her fascination with Marilyn Monroe and two of her favorite pastimes: hanging out with friends and playing music. She throws a house party filled with friends in crazy costumes. She dresses as Monroe and spends the party in parody-like pursuit of a guy dressed as one of the starlet’s leading men.

“She [Marilyn] was one of those women who was not afraid to go out and get what she wanted,” says Sammy, “I admire her so much.”

From there, the story plays out with the two weaving in and out of partygoers. Her performance showcases her acting skills while her performance with the band shows off her stage presence.

The Lamon Records production team had just as much fun, often dressing up in masks and joining the party. With expert makeup by Joel Desselles and production design by Jena Shores, Sammy made the on-screen transformation into the Hollywood icon look effortless.

President Dave Moody, Grammy nominated and Dove Award winning Artist/Producer, had this to say about working with Sammy:  “She is an exceptional songwriter, and this video does a really good job of tying in both the feel and lyrics of the song.”

Director Josh Moody enjoyed the shoot thoroughly, saying, “Working with Sammy on this video was a lot of fun.  She brought so much energy to her performance, she made shooting the video a breeze.”

The first single from Sammy Hakim, “Get A Little Closer,” can be heard on radio stations across the country.  Sammy’s video is available to watch on YouTube and Vimeo. Look for the EP to be released soon everywhere music is sold. Check out more from Sammy Hakim and other Lamon Records artists at www.lamonrecords.com