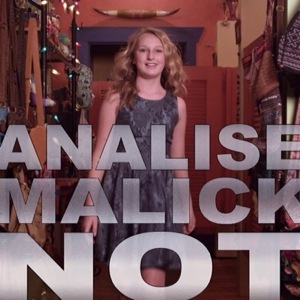 Lamon Records is proud to release the second single from Analise Malick, “NOT!” The track and video can be found on iTunes and heard on radio stations across the country February 4th.

The single is different from her country-leaning first EP with the label. It’s a chance for Analise to try out her pop voice without compromising her aspirations with country music. The single is inspired by the infectious viral pop hits by Carly Rae Jepson and Rebecca Black.

“I absolutely love the song ‘Not,” says Analise. “It’s such a fun song and I believe a lot of teenage girls will be able to relate to it.”

The video was filmed in the trendy Hillsboro Village and Gulch areas of Nashville and features many popular boutiques and sites in Music City. Analise was also able to bring along her sisters and best friends from North Carolina to be in the video. Andrew Wilson Williams of “Season of Miracles” fame also stars as the hilarious subject of her rejection.

It was an all new experience for Analise and her friends. “For me, the filming experience was phenomenal! I loved going all around Nashville to film ‘Not.’ My favorite part of filming was trying on different outfits and accessories!”

The troupe wasted little time warming up to the camera. The song captures an extroverted “she’s-just-saying-what-we’re-all-thinking” attitude from her peers and Analise’s bubbly personality shines in her vocal and on-screen performance. The Lamon Records crew had a great time capturing their natural teenage moments together.

The thirteen-year-old from Lake Norman, North Carolina, has surprisingly varied interests in music at such a young age. She plays bluegrass with her two younger sisters, pop with her peers at school, can recognize a classic rock song on the radio, and cites Taylor Swift, Carrie Underwood, The Band Perry, and Bruno Mars as her biggest influences.

Even Dave Moody, President and CEO of Lamon Records, is singing along.

“How fun is this? ‘NOT’ is one of those tunes that can be a monster hit. Analise delivers it with such power and conviction, I really did think she had dumped her boyfriend. I love it,” says Moody.

“I really hope everyone likes ‘NOT,'” says Analise. “I believe the music video is fun to watch, it was a ton of fun to film, and I hope all my fans will love it! I am so thankful for my family, friends, fans, and especially Lamon Records for supporting me!”

Look for the video on the Lamon Records YouTube page, iTunes, Amazon, and everywhere music is sold. For more on Analise and other Lamon artists, visit www.lamonrecords.com