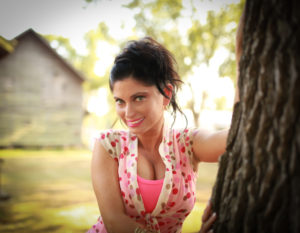 It may sound cliche, but KasCie Page is a small town girl with big dreams. And she continues to see those dreams come true. From her early years growing up in a small community near the coast of South Carolina, KasCie knew music was gonna be a big part of her life.

Her early influence was watching her mom sing in church, but that quickly grew to include performers such as Whitney Houston, Dolly Parton and Cece Winans. Throw in some Willie Nelson, Oakridge Boys, Stevie Nicks and Percy Sledge, and you quickly hear all those elements in her vocal and music style.

“My mom tells me I was as young as 3 years old when I first started humming and pretending to play piano on the kitchen floor as she sang church hymns and Christian songs around the house,” KasCie shares. “I grew up singing in church with my mom and joined the chorus in school as soon as I could. I always found peace and serenity in music and felt it as a great way to release my feelings and thoughts. I began writing poetry that translated into songs in my early teens and imagined them playing on the radio one day.”

KasCie spent some of her summer of 2016 working with the Lamon Records team in Nashville producing a ten song album and music video. The first single from this collection is a foot stomping, feel good song called Churches and Honeytonks. The album will be released January 6, 2017.

“KasCie’s has a unique vocal style,” says Dave Moody, Grammy nominated producer and President of Lamon Records Nashville. “Her new single and forthcoming album showcases her diversity and ability to make several music styles her own.”

Standout tracks on the new album include Show Me The Honey, I’m Free, Soldiers Daughter and several of KasCie’s originals written with her live music duo partner Robbie VanHoy.

KasCie adds, “My hope is that an audience will see my true spirit and love for God. I would like to reach people and somehow, in some way, help them if at all possible. Music is one of the best therapies in the world. It has so much emotion that can truly effect our lives.”

For more on KasCie Page and other Lamon artists, visit www.lamonrecords.com. You can also check out KasCie at www.kasciepage.com. For concert updates, events, and releases, stay up to date with Lamon and KasCie on Facebook, Twitter, and Instagram.