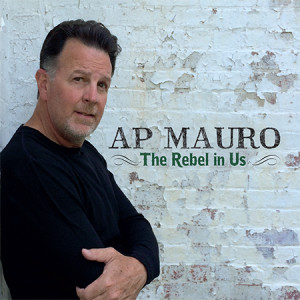 AP Mauro says about his upbringing, “I was fortunate to be born and raised in a small town that had a simple nature created by ordinary working people. It was honest living, and in spite of hardships, life seemed uncomplicated. These values run deep and will always have a place in my music.”

The songs on his new CD “The Rebel In Us” (distributed by Lamon Records Nashville) cover wide ranging themes. “River Leave me Alone” is about his father’s dealing with the extensive flooding of his home caused by second-costliest hurricane in United States history. “The Dragon Chasing You” relates the concern for a loved one’s addiction. “Miami” is the name of a girl with a secret love, and “Cry and Cry” is about a person’s difficulty trying to solve one of life’s problems, with the title being the last resort.

AP was honored by the talent gathered to make the new CD.  He explains, “I wanted to make sure “The Rebel in Us” was a quality production, so we assembled a Who’s Who of talent in the music industry. They have toured or recorded alongside such prominent country artists as: Shania Twain, Kenny Chesney, Willie Nelson, Don Henley, Linda Ronstadt, Loggins and Messina, Amy Grant, Vince Gill, and the list goes on and on.”

AP continues, “I asked Steve Jankowski to co-produce, engineer, and arrange the music. Steve has a bio as long as my arm, including being musical director for Blood, Sweat and Tears, and now touring with multiple Grammy award winner Niles Rodgers.”

Today, AP performs his music primarily in the northeast and is rapidly increasing his fan base there, with plans to travel throughout the south, and beyond, in the near future. His songwriting themes include many experiences ranging from adversity and love to the grandeur of the outdoors.

He’s very appreciative of his fans, and they tell him how much they enjoy his unique country style. In fact, AP honored his supporters, and their willingness to sidestep the crowd to blaze their own country music trail, by titling the CD, “The Rebel in Us.”

The new single “Unfaithfully” is at radio now and the new CD release is being distributed by Lamon Records Nashville.  For more information, contact 615.379.2121 or visit the website at www.lamonrecords.com