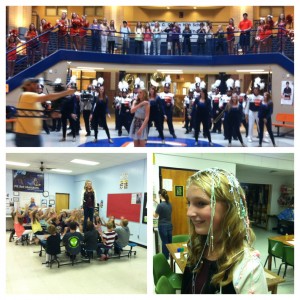 Lamon Records artist Analise Malick spent her Saturday in school. She wasn’t in detention or making up for too many absences. She was filming her first music video – not something most thirteen-year-olds can say they’ve had the opportunity to do. Her single “1,000 Things” has been released to radio, and the music video and EP by the same title will release October 29th.

The song revolves around the many things most adults dream about doing to break away from the monotony of day-to-day life at work. Analise was drawn to the song because of its positive message and pop musicality. It’s the perfect track to showcase her mature voice and magnetic personality, but how would a 13-year-old know about getting rid of a “dead-end job?”

The music video, produced by the Lamon Records team, portrays Analise in a school setting with actions that mirror each line of the song as they relate to her as a student, dreaming of a life outside of school. Analise sings about performing with a band, winning big in Vegas, and falling in love. Meanwhile the video shows her performing with the marching band, playing cards with the cheerleaders, and stealing innocent glances from a male classmate. The concept blends tastefully her dreams of growing up fast with the life she’s familiar with in school.

“Analise is a super talented young vocalists, with a voice that’s mature beyond her years,” says Dave Moody, producer and president of Lamon Records. “Watching her on set while filming her new ‘1000 Things’ music video, it was fun to see the performance side of her come alive.”

The team traveled to Analise’s school, Mount Mourne IB in Mooresville, NC, as well as Jesse C. Carson High School in China Grove, NC to film the video. She rallied her friends and classmates to play themselves and Carson High graciously brought in their cheerleaders, marching band, and color guard.

“The process of filming the music video completely exceeded my expectations. I felt like I was part of a real movie! It was awesome. I can’t even really explain how I felt when we were shooting. I felt like the luckiest girl in the whole entire world! I am so blessed to be living my dream at such an early age,” says Analise.